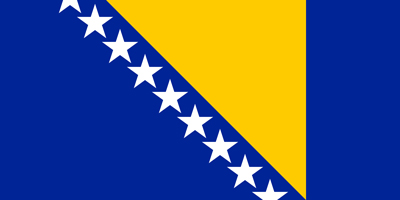 Bosnia and Herzegovina share boundaries with Croatia on the north, west, and south, Serbia and Montenegro on the east, and the Adriatic Sea on the south, with a total boundary length of 1,459 km.

Approximately 50% of the land is forested.

The capital city of Bosnia and Herzegovina, Sarajevo, is located near the center of the country.

The country's population is 3.84 million, most of whom are Bosnians, then Serbs and the least of all are Croats and all three languages are spoken.

Islam is the majority faith in Bosnia and Herzegovina and the other population identifies as Christian. There is a small Jewish community as well.