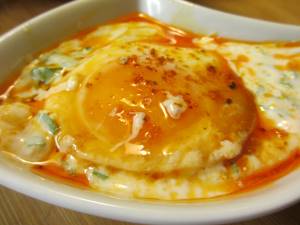 Chalbur or eggs on water is delicious dish, that in the Southeastern region of Macedonia is mostly prepared in the following manner. It can be combined with sour milk and garlic, and even onions, but the main thing, the eggs on water remain unchanged.

The cheese is crushed and placed in a bowl. The eggs are breaked and they are put in a pot of salted hot water or boiling water. Eggs are boiled a few minutes like this, until the yolk start to thicken and still remain liquid. The duration for boiling of the eggs is different, according to taste. Once the eggs will get the desired density, they are removed from the water and are placed towards the cheese. In a pan with a little oil in it half teaspoon paprika is slightly fried and it is poured over the eggs with cheese. 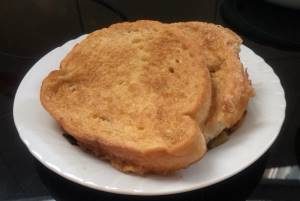 The crouton is traditional food, that is served in each season. Mostly it is served with piece of cheese, but it is delicious, as well as, in combination with sour milk or yogurt.

The bread is cut into pieces. The eggs are needed to be put in a bowl, they are salted and nicely mixed with fork. Each piece is nicely defiled in the eggs and is fried on both sides in pan that is nicely covered with oil. In each frying of new pieces of bread the pan is being wiped with a napkin and a little oil is added. 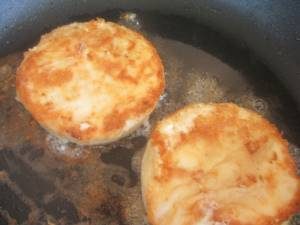 Fried cheese is prepared for daily consumption as a starter or appetizer.

The cheese is cut into rectangular pieces with thickness 0.5 cm., it is messed up in the flour and fried on both sides in a pan on heated oil. Once it is fried, each piece of cheese is placed on a paper napkin to remove excess fat. 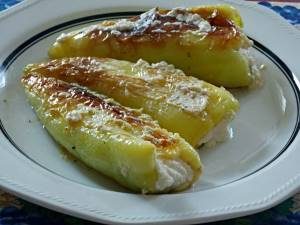 A Fried pepper with white cheese curd is a casual meal, which is often prepared in summer. It is served as a starter combined with bread, cheese and tomato salad.

Once you wash and dry the peppers remove the handles and the seeds. Add salt from the inside and fill them up with 1-2 spoons of salted curd mixed with the egg. The curd needs to be dry in order not to run out of the peppers. The stuffed peppers with curd are fired from all sides in cooking oil on moderate fire. 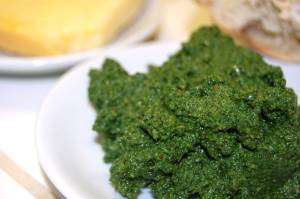 This simple, delicious and healthy dish is usually prepared in spring when nettles are young and contain the most vitamins. Koprivnik can be served with yogurt or sour milk.

Nettles are nicely washed and then they are poured with boiling water in which they have to stay few minutes. Then they are being dried and crushed. Nettles are fried a little in a pan with heated oil, and then water and salt are added. Once the water with nettles boils the flour mixed in water is added. All mixture is nicely mixed and placed in preheated oven to thicken and become slightly baked. 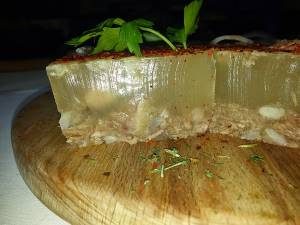 Pacha is food which is usually prepared in winter. It requires relatively long time to prepare, but when it is ready to consume the cold morsels are rich in flavor, especially when accompanied by a good cup of grape brandy. The pacha is cut into cubes and it is served as a starter or appetizer.

The pigs’ feet and boneless pork are washed and placed in a pot with cold water and boiled on a moderate fire for about 5 hours. Initially, once the water gets warm, foam appears and it should be removed. Once the foaming stops salt, black pepper, bay leaf, chopped onion and half of the garlic is added. Once half of the water has evaporated, use fork to check if the meat is ready. If the meat separates from the bone by itself, it means it’s done. The meat is cut into small pieces, and the meat from the feet needs to separate from the bone and shred them into small pieces. The water from the pot is left to cool down, and it is poured through a strainer while using spoon to collect the detached fats that collect on the surface. The remaining cloves of garlic are finely chopped or crushed and added to the broth. The meat is then placed in a larger or smaller plates and the broth is poured over it. Leave the plates with pacha to cool down and the broth to become jell. 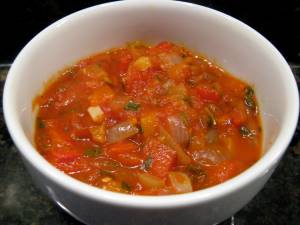 This starter, characteristic for the region of Strumica is often prepared during the summer period, the season of peppers and tomatoes. It can be served hot or cold, combined with cheese and homemade bread.