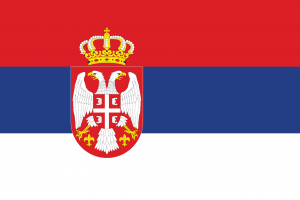 Serbia (The Republic of Serbia) is one of the former Yugoslav Republics that kept the name of the federation along with the Republic of Montenegro, from the breakup of the great federation in 1992 until February 2003. Now, Serbia is a sovereign state situated at the crossroads of Central and Southeast Europe in the southern Pannonian Plain and the central Balkans. It borders Hungary to the north; Romania and Bulgaria to the east; Macedonia to the south; Croatia, Bosnia and Herzegovina, Montenegro to the west and claims a border with Albania through the disputed territory of Kosovo.

The official language is the Serbian language.

Serbia numbers around 7 million residents. Its capital, Belgrade, ranks among the oldest, the largest and the most eventful cities in Southeastern Europe.

The country’s climate is between a continental climate in the north, with cold winters, and hot, humid summers with well-distributed rainfall patterns, and a more Adriatic climate in the south with hot, dry summers and autumns and rank daily average relatively cold winters with heavy inland snowfall. Differences in elevation, proximity to the Adriatic Sea and large river basins, as well as exposure to the winds,  account for climate differences. Northern Serbia possesses a typical continental climate, with air masses from northern and western Europe which shape its climatic profile. South and South-west Serbia is subjected to Mediterranean influences.

Amongst the numerous contributions that Serbia has given to the world are the following: the medieval monastery architecture; the mixed Mediterranean, Turkish and Austro-Hungarian cuisine; a vast number of top athletes, including one of the best tennis players of all times -Novak Djokovic; and amongst many others, of course Nikola Tesla, one of the most renowned names in physics and the electrical engineer who contributed to the design of the modern electricity system.