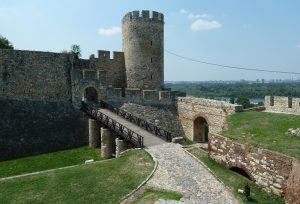 It is considered that the fortress is as old as the city itself. Composed of the old citadel and the Kalemegdan Park, the Fortress is located on the confluence of the Rivers Sava and Danube in the municipality of Stari Grad in Belgrade. Belgrade Fortress was declared as a Monument of Culture of Exceptional Importance in 1979, and it is the most visited tourist attraction in Belgrade. 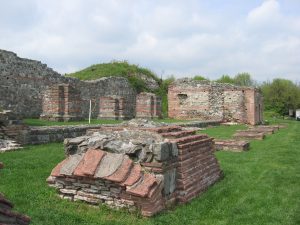 Gamzigrad is an archaeological site, spa resort and UNESCO World Heritage Site of Serbia, located south of the Danube river, near the city of Zaječar. In the vicinity of Gamzigrad, lie the ruins of a huge Roman complex called Felix Romuliana, one of the most important late Roman sites in Europe. Archaeological excavations on the site have unearthed the remains of the city’s structures, along with a large number of sculptures, mosaics, and gold coins from Roman, Egyptian and Greek origin. 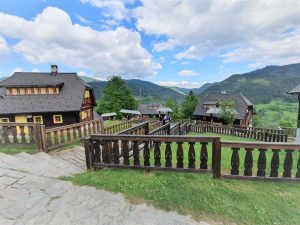 Located on Mećavnik hill in Mokra Gora nature park, the meeting point of two beautiful mountains Tara and Zlatibor, Ethno village Drvengrad is a product of the film director Emir Kusturica’s imagination, and was built for the production of his film “Life is a miracle”. Every year it hosts the Kustendorf festival, an event visited by some of the world’s top film stars. Drvengrad has an art gallery, a library, a cinema called “Underground”, after one of Kusturica’s most famous movies, a cake shop with home-made sweets, a restaurant with traditional Serbian cuisine and a souvenir shop, as well as a fantastic and mystical atmosphere that actually resembles a fairy tale town. 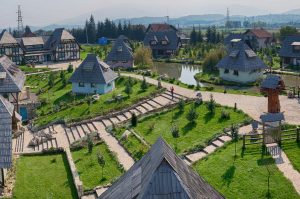 The House of Flowers is located In one of the most beautiful locations in Belgrade, with a great view of the city. It was built in 1975, as a winter garden for the needs of the former President of Yugoslavia, Josip Broz Tito. It consists of a fountain, restrooms - working and sleeping rooms, lounge, guest room, library, and other rooms.

Tito died on 4th May 1980, and after his death, the winter garden was rearranged to his last resting place. Today Tito’s tomb occupies the central room, and the entire building is called The House of Flowers because in the socialistic period it was inappropriate to call this place “the last resting place of” in that time the most popular figure in Yugoslavia, Josip Broz Tito.

Today there is a permanent exhibition in the House of Flowers, consisting of a memorial room with a book of sorrow and an exhibition featuring local, republican and federal batons that Yugoslav youth carried on the occasion of Tito`s birthday on 25th May, celebrated as the Youth Day. The set contains written messages that Tito received with relays, photos of bearers of relays as well as festivities on the occasion of the Youth Day, marshal uniforms and others. 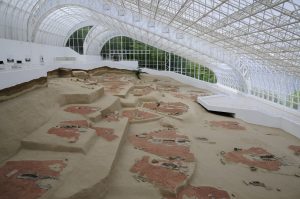 Lepenski Vir is one of the largest and most significant prehistoric archaeological sites from the Stone Age. The culture of the place is around 8.5 millennia old and it is a cradle of archaeological discoveries that have changed our knowledge about the early Stone Age in Europe. It is located on the right bank of the Danube near the town of Donji Milanovac. This site is protected as a nature reserve. 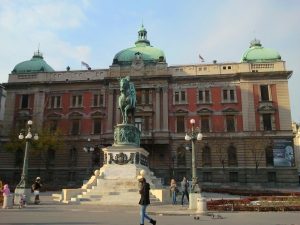 The National Museum of Serbia is the largest and oldest museum in Serbia and the former Yugoslavia. It is located in the central zone of Belgrade. The museum was established on May 10, 1844. Since its foundation, its collection has grown to over 400,000 objects, including many foreign masterpieces. The National Museum of Serbia building was declared as a Monument of Culture of Great Importance in 1979.

Oplenac, Serbia, is a hill located in the town of Topola. St. George′s Church and the Mausoleum of Karadjordjevic dynasty are located on top of Oplenac. This place has always been an important crossroad to going from one to another city, like Belgrade, Kragujevac, Rudnik and Šabac. The view from the top of the hill of Oplenac spreads out to the hills of Šumadija and plains of Morava valley.

Topola became the most important town during the time of the First Serbian Uprising against the Ottomans, in 1804, when Karadjordje Petrović, who was born in the nearby village of Viševac, settled down in Topla. He turned Topola into the capital of liberated Serbia. From 1811 to 1813, the town was fortified, surrounded by a moat, with three-story towers and palisades. But soon the Ottoman recaptured Topola and Karadjordje’s town was burned to ashes and the town lost its original importance. The region importance was reborn during the rise of Karadjordje’s son, Prince Alexander, who restored his father’s vineyards and orchards on the eastern slopes of Oplenac hill.

Starting from April to October, in Serbia’s capital Belgrade, you can visit the Royal and the White Palace and be welcomed by the Royal family.

The Royal Palaces can be visited every Wednesday at 10:00 am, and on weekends – Saturday and Sunday at 10:00 am and 1:00 pm. Ticket includes organized transportation, entrance to the Palaces, and professional guide. The number of people in a group is restricted to a maximum of 50 visitors.

The fortress of Nis 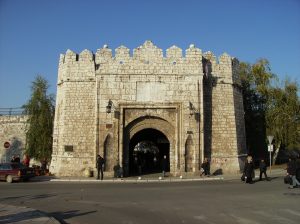 Niš Fortress is a complex and important cultural and historical monument. It rises on the right bank of the Nišava River, overlooking the area inhabited for longer than two millennia. The existing fortification is of Turkish origin, and it is erected on the site of earlier fortifications – the ancient Roman, Byzantine, and later yet Medieval forts. Today, one of the cultural significations of the fortress is that it is the home location of the Niš Film Festival. 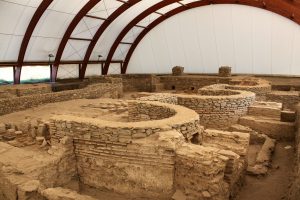 Viminacium was a major city (provincial capital) and military camp of the Roman province of Moesia (today's Serbia). The site is located 12 km (7.5 mi) from the modern town of Kostolac in Eastern Serbia. The city dates back to the 1st century AD. Today, the archaeological site contains remains of temples, streets, squares, amphitheaters, palaces, hippodromes, and Roman baths.