Saint Demetrius or Agios Dimitrios is the patron saint of Thessaloniki. He decided to get secretly baptized a Christian, something forbidden those years when idolatry gods were still worshipped. He was, after that, ordered to chase and kill the Christians of Thessaloniki and was asked to change his religious beliefs. When refusing all that, he was imprisoned, tortured, and died soon after that, for his God. Before his death, he donated all his wealth to the poor. His bravery and sacrifice made him an Orthodox saint. After his death, and after Constantine the Great ended the prosecution of the Christians, a small church was built on the place of his martyrdom. Shortly afterward, a bigger five-aisled basilica was built, which remains till today and constitutes the largest church of Greece. 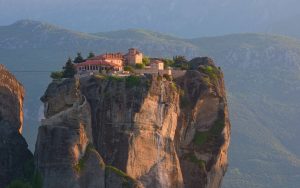 Serene, spiritual, magical, mystical, extraordinary, breath-taking, immense, inspiring, impressive, are all the right words to describe this phenomenon. From the early Christian times, the Meteora vertical cliffs were regarded as the perfect place to achieve absolute isolation, to discover peace and harmony and, thus, to support man’s eternal struggle for spiritual elevation. Meteora is a truly inspiring and sensational setting of overwhelming rock formations, but it is also a pilgrimage to a holy place for all Christians around the world. Meteora has become a preservation ark for the 2000-year-old Christian Orthodox creed. The monasteries remain till present day the memorials of a glorious past of the Eastern Christian world. 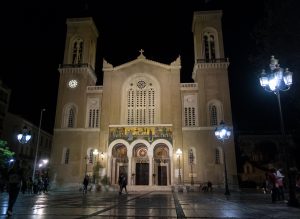 When Athens became the capital of Greece in 1834, a cathedral was needed. Three architects and 20 years later, it was complete. Workers used marble from no less than 72 demolished churches to build the Mitrópoli's immense walls. The Mitrópoli is the seat of the Bishop of Athens and an important spiritual center of Greek Orthodoxy. The Mitropoli has three aisles, a dome over the crossing, and twin west towers. Inside are colorful Byzantine-style frescoes, gleaming treasures, and the tombs of two saints killed by the Ottoman Turks. It remains a major city landmark and the site of official ceremonies.

Monasteries of Daphni, Hosios Loukas and Nea Moni of Chios 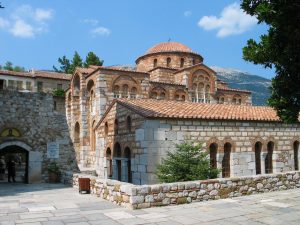 Although geographically distant from each other, these three monasteries (the first is in Attica, near Athens, the second in Phocida near Delphi, and the third on an island in the Aegean Sea, near Asia Minor) belong to the same typological series and share the same aesthetic characteristics. The monasteries represent, with their admirable mosaics on a gold background, unique artistic achievements. They are all included on the World Heritage List and each of them forms part of a monastic complex and a well-preserved natural environment. Including the fact that the monasteries are situated on earthquake zones, appropriate measures were taken, so that today the properties are in good condition. 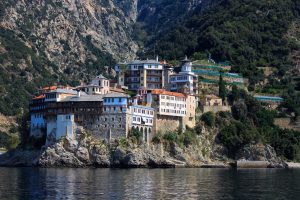 Mount Athos is the oldest surviving monastic community in the world. It dates back more than a thousand years. The mount lies in the best part of the Athos peninsula in Halkidiki. Because of its isolation, Mount Athos has remained one of the most unspoiled parts of Greece. The history and fortunes of Mount Athos were turbulent and varied over the centuries. According to the legend Panagia, the Virgin Mary and Mother of God walked ashore and, overwhelmed by the wonderful and wild natural beauty of the mountain she blessed it and asked her Son for it to be her garden. The first hermits were settled here in the ninth century. By the eleventh century, the number of monasteries increased greatly, some say to 180. A great number of them were ruined by pirates through the ages. Today there are 20 monasteries left, of which 17 are Greek, one Russian, one Serbian, and one Bulgarian.

One of the most beautiful and distinctive of the Dodecanese Islands, Patmos is best known as the place where St. John received his visions and wrote the Book of Revelation. A small island, with a population of little over three thousand people, Patmos is located in the South Aegean Sea, not far from Turkey. The Monastery of St. John the Devine, also known as the Monastery of St. John the Theologian is a fortified Orthodox monastery and with the nearby Cave of the Apocalypse, where the revelation took place, are major pilgrimage destinations and popular tourist sites as well.