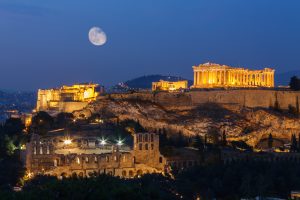 The capital and the largest city of Greece is one of the world's oldest cities, with its recorded history spanning over 3,400 years. It was a powerful civilization, city-state, and empire at the heart of Ancient Greece. Over the years, a multitude of conquerors occupied Athens and erected unique, splendid monuments - a rare historical palimpsest. The city is still dominated by 5th-century BC landmarks, including the Acropolis, a hilltop citadel topped with ancient buildings like the colonnaded Parthenon temple. Today, a large part of the town’s historic center has been converted into a 3-kilometer pedestrian zone (the largest in Europe), leading to the major archaeological sites (“archaeological park”), reconstructing to a large degree – the ancient landscape. In 1834, Athens became the capital of the modern Greek state and two centuries since then, it has become an attractive modern metropolis with unrivaled charm. In the “heart” of Athens’s historical center, is the traditional commercial neighborhood, with more than 2,500 shops of all kinds, which spreads out over the streets surrounding Ermou Street (the city’s best-known commercial street). Thanks to its rich morphology Athens has plenty of places where you can admire stunning panoramic views of the city. You will be very easily captivated by the Athenian cityscape as seen from above. 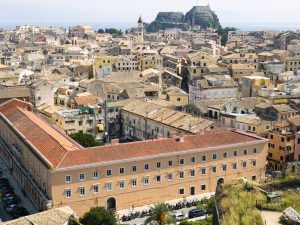 Known for its cobblestone streets and pastel-coloured Venetian architecture, Corfu Town is the capital of Corfu Island, in the Ionian Sea. The name Corfu, meaning ‘peaks’, refers to its twin hills, each topped by a massive fortress built to withstand Ottoman sieges. Sitting between the two, the Old Town is a tight-packed warren of winding lanes, some bursting with fine restaurants, lively bars and intriguing shops, others timeless back alleys where washing lines stretch from balcony to balcony. It also holds some majestic architecture, including the splendid Liston arcade, and high-class museums, along with no fewer than 39 churches.Its rich multi-cultural heritage, its historic monuments, its stunning natural landscape, its crystal clear seas, and its excellent weather all year round, explain why Corfu is one of the most cosmopolitan Mediterranean destinations weaving a powerful spell on its visitors. 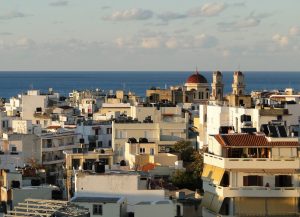 Heraklion is the largest city of Crete and one of Greece’s major urban centers. In its times Heraklion was under Arabic, Venetian and Ottoman rule, and all of them made their own mark to the city’s landscape. Among the most outstanding sights of Heraklion are the fortification walls that delimit the “old city”. The first fortifications were built by the Arabs and were later reinforced by the Venetians. From the seven bastions, only the Martinengo bastion survives to this day. In the heart of the city, many monuments are dating to the Middle Ages, a period in which Heraklion witnessed great prosperity. A typical feature of Heraklion is its Venetian and Turkish fountains, scattered all around the city. The most famous one is the Venetian-style Μorozini fountain, also known as the Lions. Among the churches of Heraklion, the one that stands out is the imposing and sizeable Metropolis of Agios Minas (on Agia Ekaterini Square). One should not miss out on a visit to the Archaeological Museum, one of the most important museums in Greece that contains almost all the unique treasures of the Minoan civilization. Other museums that present this town’s history are the Historical Museum, the Museum of Natural History and the Aquarium “Cretaquarium”. 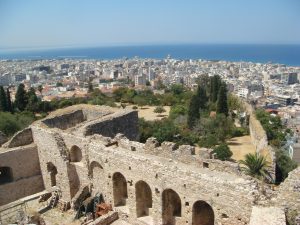 Patras, a bustling student city, a place where entertainment, history, and culture mingle together to create a destination filled with wonderful discoveries. A romantic stroll around the Old City’s cobbled streets will reveal grand colorful neoclassic mansions, reminders of the city’s glorious past. Visit the city’s Medieval Castle built on the ruins of the ancient Acropolis. West of the Acropolis is the upper city, where the surrounding space is turned into an archaeological area where mosaics, sarcophagi, and other ancient findings are displayed. The romantic souls seek for the city’s landmark, the Lighthouse, to enjoy a breathtaking panorama of the port. In the center of the city, two historical monuments will certainly draw your attention: Saint Andrew Church, one of the biggest churches in the Balkans, and the “APOLLON" Municipal Theatre, one of the first opera houses in Europe. Patras is one of the Greek cities that never sleeps. You just need to follow the rhythm. 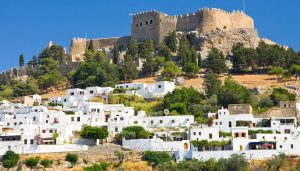 Rhodes, the capital of the Dodecanese, an island which is ideal not only for those who want to relax but also for those looking for an action-packed holiday. With its bright green hills, rich green valleys and uninterrupted lines of golden beaches, Rhodes is truly a blessed place. Thanks to its strategic position, Rhodes has been important since ancient times. When it became a province of the Roman, and later the Byzantine Empire, it initially lost its ancient glory. But in 1309 the Knights of Saint John of Jerusalem conquered Rhodes. They built strong fortifications to protect the island, turning it into an important administrative center and a thriving multinational medieval city. In 1988 the Medieval City of Rhodes was listed as a UNESCO World Heritage site. Outside the walls of the Old Town lies the “new” city, with its magnificent Venetian, neoclassic and modern buildings. A visit to the Aquarium, one of the most important marine research centers in Greece, is something you wouldn’t want to miss. In the underground aquarium, reminiscent of an underwater cave, the visitor can see many of the species living in the Aegean. Here, you may also visit the Evangelismos church, the Town Hall, the National Theatre, Rodíni Park, Saint Stefanos Hill, the Temple of Apollo, the Hellenistic stadium and the gymnasium. 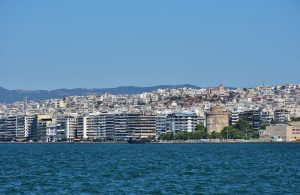 Thessaloniki is easy to fall in love with – it has beauty, chaos, history and culture, remarkable cuisine and wonderful, vast sea views. It is the second largest city in Greece and an important center in a lot of fields. Built near the sea (at the back of the Thermaïkos Gulf), it is a modern metropolis bearing the marks of its stormy history and its cosmopolitan character, which give it a special beauty and charm. The archaeological sites that represent the city landmarks are the ancient forum, The Triumphal Arch of Galerius (Kamara) and The Rotunda. Byzantine monuments worthwhile seeing are The churches of Acheiropoietos, the Holy Wisdom of God, the Panaghia (Virgin) Chalkeon, Hosios David and St. Panteleimon; the Byzantine walls of the city, the archaeological site in 3 Septemvriou St., the Byzantine bathhouse and the Heptapyrgion castle. Many other Ottoman and modern buildings and monuments will also catch your eye. But as we said, Thessaloniki is much more than just historically recognized. Here you can enjoy shopping in the city’s most remarkable Tsimiski Street, which is undoubtedly the major axis of Thessaloniki City Center shopping district. Thessaloniki nightlife has been included in the list of the top 10 nightlife cities in the world. The activities in the city are nonstop day and night. Thessaloniki city center is flooded with people of all ages. The feeling that the city visitors get when they see the city center, is that Thessaloniki never sleeps. 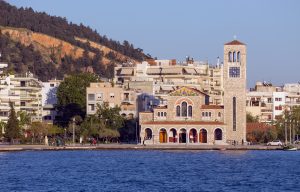 Volos is one of the largest and most attractive cities in Greece as well as one of the country’s most prominent ports. The modern-day cities built at the foot of the Mount Pelion overlooking the Pagasetic Gulf. This is one of the most beautiful areas in Thessaly, in the center of Greece, combining the allure of the sea with the mystical charm of the Centaurs’ mountain. The area’s mythical background captivates the visitor’s imagination. Magnesia features some of the most remarkable tales in Greek mythology. The progenitor of its peoples was Magnes, son of Zeus and Aeolus, yet Magnesia is believed to be the birthplace of a strange race, the Centaurs, beings which were part equine, part human and originated from the union of Nephele and Ixion. Asclepius and Achilles were, among others, pupils of the Centaur Chiron. The famous Argonaut expedition, one of the greatest epics in the Greek mythological cycle, set sail from the Pagasetic Gulf. The wealth of the region and its long history have left their mark on the city’s architecture, which exudes confidence and grandeur. The numerous mansions, municipal halls, museums, early 20th century industrial facilities and splendid churches, make touring Volos truly enjoyable. The sights in Volos are so numerous that the visitor will feel his day is more than full. For those that dislike walking, there is a 10 km wide network of cycle lanes and thousands of bicycles silently providing a healthy and ecological means of transport. When walking or cycling through the city, don’t miss Volos castle, the large Park of Agios Konstantinos, The Achilleio cinema, the Church of Agioi Konstantinos and Eleni, Agia Triada and The verdant Goritsa Hill.