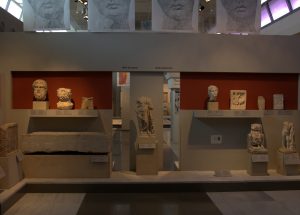 This institution is one of the largest museums in Greece and the central museum of northern Greece. The permanent exhibitions of the Museum include unique masterpieces of ancient Greek art, dating from prehistoric times to late antiquity. The Museum also consists of two open-air exhibitions in its courtyard that are filled with antiquities, monuments, even a built-in urban house of the Imperial era that is free of charge for the visitors. 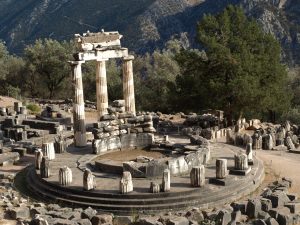 The pan-Hellenic sanctuary of Delphi, where the oracle of Apollo spoke, was the site of the omphalos, the 'navel of the world'. Blending harmoniously with the superb landscape and charged with sacred meaning, Delphi was indeed the religious center and symbol of unity of the ancient Greek world. Delphi lies between two towering rocks of Mt. Parnassus, in Central Greece. The magnificent monumental complex is a human-made environment in perfect harmony with the rare natural environment, the principal features of which gave rise to the organization of the cults. This harmonious relationship, which has remained undisturbed from ancient times to the present day, makes Delphi a unique monument and a priceless legacy bequeathed by the ancient Greek world to the following generations. 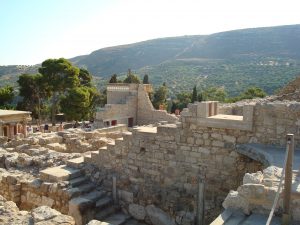 Between 1.700-1.450 BC, the Minoan civilization was at its peak and Knossos was the most important city-state. During these years, the city was destroyed twice by earthquakes and rebuilt. The site was discovered in 1878, and the excavations began in 1.900. The site is filled with several important monuments, like The Great Palace, The Little Palace, The Royal Villa, The house of The High Priest, The Caravan Sarai and The Royal Temple Tomb-Sanctuary. In Knossos, also lies the temple of Artemis in Efesos, the Artemisio, one of the seven wonders of the ancient world.

Archaeological Site of Mycenae and Tiryns 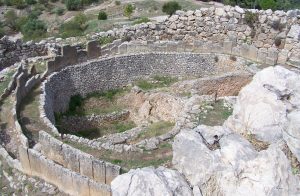 The archaeological sites of Mycenae and Tiryns are the imposing ruins of the two greatest cities of the Mycenaean civilization, which dominated the eastern Mediterranean world and played a vital role in the development of the classical Greek culture. These two cities are indissolubly linked to the Homeric epics, the Iliad and the Odyssey, which have influenced European art and literature for more than three millennia. The Archaeological Sites of both cities are located in the Regional unit of Argolis in the North-East Peloponnese. 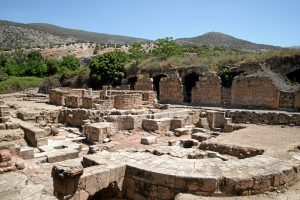 The remains of this walled city lie at the foot of an acropolis in north-eastern Greece, on the ancient route linking Europe and Asia, the Via Egnatia. Founded in 356 BC by the Macedonian King Philip II, the city developed as a “small Rome” with the establishment of the Roman Empire. Hellenistic Philippi had a fortification wall, a theatre, several public buildings, and private houses. In the dramatic battle of Philippi, the city was conquered by Octavian and became a part of a Roman colony. Another important event marked the city's history a century later. Saint Paul founded the first Christian Church on European soil at Philippi. Three magnificent basilicas and the Octagon complex, the cathedral dedicated to Saint Paul, were erected in the center, whose remains still witness this city’s exceptionally rich history. 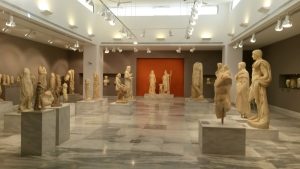 The present anti-seismic museum building was constructed on the site of the imposing Venetian Franciscan friary destroyed by an earthquake in 1856. It houses representative artifacts from all the periods of Cretan prehistory and history, covering a chronological span of over 5,500 years from the Neolithic period to Roman times. The singularly important Minoan collection contains unique examples of Minoan art, many of them true masterpieces. The Heraklion Museum is rightly considered as the museum of Minoan culture par excellence worldwide.

The Acropolis of Athens and its monuments are universal symbols of the classical spirit and civilization and form the greatest architectural and artistic complex bequeathed by Greek Antiquity to the world. As thought and art flourished, an exceptional group of artists transformed the rocky hill into a unique monument of thought and the arts. The monuments of the Acropolis have withstood the ravages of past centuries, both of ancient times and those of the Middle Ages and a great part of them are exhibits in the Acropolis Museum.

The National Archaeological Museum in Athens

Although its original purpose was to secure all the finds from the nineteenth-century excavations in and around Athens, it gradually became the central National Archaeological Museum and was enriched with finds from all over Greece. Its abundant collections, with more than 11,000 exhibits, provide a panorama of Greek civilization from the beginnings of Prehistory to Late Antiquity. The vast exhibition space -housed in an imposing neoclassical building of the end of the nineteenth century, contains five large permanent collections: The Prehistoric Collection, the Sculptures Collection, the Vase, and Minor Objects Collection, the Metallurgy Collection and the Egyptian and Near Eastern Antiquities Collection.

Vergina is best known as the site of ancient Aigai, the first capital of Macedon. It was there when in 336 BC Philip II was assassinated in the theatre, and Alexander the Great was proclaimed king. The ancient site was discovered in 1976 and the excavation unearthed the burial sites of many kings of Macedon, including the tomb of Philip II, which, unlike so many other tombs, had not been disturbed or looted. To house all the artifacts found at the site, the Archaeological Museum of Vergina was built, and today it is one of the most important museums in Greece.