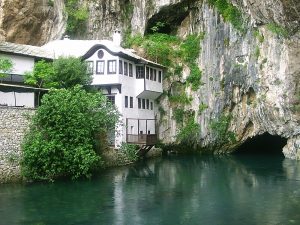 Blagaj is a small village in the southern part of Bosnia and Herzegovina, 7 km south of Mostar. Within Blagaj is the famous tekija, or monastery, which was founded by the Dervish monks in the 16th century. The Tekija was built on a rocky soil at the right side of the source of the Buna River. A very high cliff stretches above the Tekija for some 240 meters. On top of that cliff lie the remains of Stjepan Vukcic-Kosaca’s fort-town dating back to the Middle Ages. The complex was damaged more than once because of rocks collapsing. It is a well-known fact that the Tekija was rebuilt after each of these unfortunate events, on multiple occasions. The tekija dervish house is a magical place, blessed with the powers of both humans and nature. This is the place where dervishes performed their special rituals –“zikir” (praising God).

Ferhat Pasha Mosque, also known as the Ferhadija Mosque, is a central building in the city of Banja Luka. The mosque building is representative of the 16th century Ottoman Islamic architecture. The mosque was demolished in 1993 at the order of the authorities of Republika Srpska and was rebuilt and reopened for the public on 7th May 2016. Today, we can all take a look at the beautifully-painted interior of the mosque. 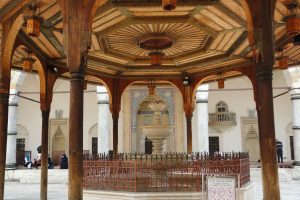 Built in 1532, the Gazi Husrev-Beg Mosque in Sarajevo’s old town is the largest historical mosque in the country and is the center of the city’s Islamic community. It is exemplary of the Ottoman architecture for which the city is well-known, and is open for tourists to look around. Outside is a beautiful open courtyard with a fountain for ceremonial washing, and the main entrance is decorated with intricate Islamic designs and patterns. It has several domes, which are a typical feature of Ottoman mosques, rather than Middle-Eastern architectural designs. Although much of it was damaged during the civil war, in 1996 began the reconstruction of the mosque as a high priority, given its centrality to the culture of the city. 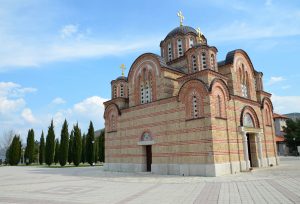 Offering phenomenal views, the hilltop Hercegovačka Gračanica complex comprises a bell tower, a gallery and the bishop's palace, but most notably the compact but eye-catching Presvete Bogorodice Church. It is located at the top of a hill, overlooking the town of Trebinje and offers lovely views. It is surrounded by a neat courtyard, with tables where visitors can enjoy the view, and lush green trees and lawns. The church itself is built in a traditional Eastern Orthodox style, including several domes as well as gold crosses on the roof. It was built in the late 19th century and has a rich interior, featuring extravagant gold chandeliers, ornate paintings, and carved columns. The church is open to visitors and is a lovely spot to enjoy a sunny afternoon, looking out over the town below. 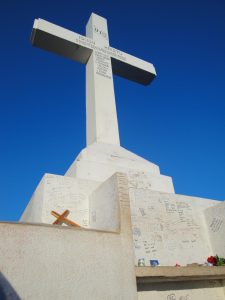 ‘Medjugorje’ directly translates as ‘between the mountains’, which is fitting for a town located in the Herzegovina region of Bosnia, at 200 meters above sea level and close to the border with Croatia. Since the early 1980s, the town has acquired something of a cult status, with religious and non-secular tourists flooding the site following a series of reported apparitions of the Virgin Mary. As a result, Medjugorje has earned the nickname of the ‘Bosnian Lourdes’, as its reputation for supernatural events has earned considerable public interest over the years. This recurrent apparition of the mother of Christ is now locally referred to as ‘Our Lady of Medjugorje’, with the six children – now adults – describing how she variously introduced herself as ‘Queen of Peace’, ‘Mother of God’ and ‘Most Blessed Virgin Mary’. The visionaries Majira Lunetti and Mirjana Solda each claim to witness her presence at different days every month and regularly hold sessions with visitors. It is unsurprising then, that Roman Catholics across the globe have become fascinated by this site, which has become a popular destination for pilgrims – statistically considered to be the third most important mecca of its kind in Europe. 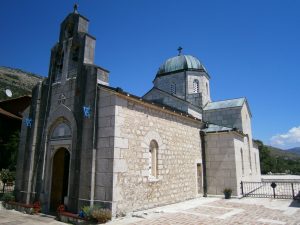 Tvrdoš Monastery is a Serbian Orthodox monastery, located near the city of Trebinje, Republika Srpska, Bosnia and Herzegovina. The Orthodox monastery was established there in the 15th century, but foundations of a 4th-century Roman church are still visible at the site. With a cathedral constructed around 1508 and painted with murals by Vicko Lavrov from Dubrovnik in 1517, the monastery remained a seat of the Metropolitans of Herzegovina until the Venetian Empire destroyed it in 1694. The current building of the monastery was constructed in 1924. Today, the monastery is renowned for its wine production (in particular from the local Vranac and Žilavka grape varieties) and its wine cellars, one of which dates back to the 15th century, and is a very popular tourist attraction. As of late 2016, the monastery remains on the Provisional List for status as a National Monument of Bosnia and Herzegovina.