Academy of Arts in Sarajevo 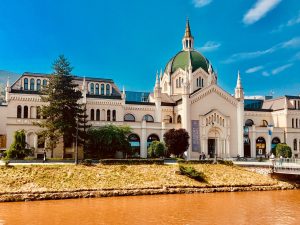 The Academy of Fine Arts in Sarajevo was originally built to serve as an Evangelical Church, but in 1972 was established as a public high education institution and a member of the University of Sarajevo. It was founded by renowned artists, scientists, professors and professionals in the area of culture. The Academy comprises six specific departments, each with several elective subjects, and each of these departments educates students for a specific art activity in the manner that meets the criteria of education in arts.

Visocica Hill, the Bosnian Pyramid, is considered to be the first European pyramid, located in the heart of Bosnia, in the town of Visoko. The pyramid has all the elements: four perfectly shaped slopes pointing toward the cardinal points, a flat top, and an entrance complex. Because of its similarities to the Pyramid of the Sun in Teotihuacan, Mexico, it has been named the Bosnian Pyramid of the Sun. 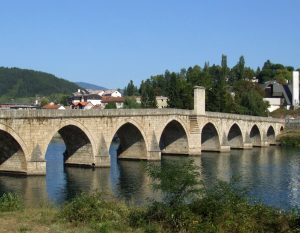 This bridge lied across the Drina River in the east of Bosnia and Herzegovina, which was built at the end of the 16th century, from the court architect Mimar Koca Sinan, on the orders of Grand Vizier Mehmed Pasa Sokolovic and is a triumph of Ottoman monumental architecture and civil engineering. With its 11 masonry arches spanning 179 meters, the bridge is celebrated as a perfect example of proportion. In 2007, the bridge entered the UNESCO world heritage list as a bridge with a big cultural impact, and also as best representative of a classical ottoman style in bridge making. 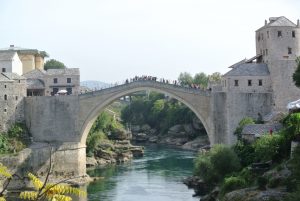 Mostar has long been known for its old Turkish houses and Old Bridge, after which it is named. Stari Most (Old Bridge) is a stone arch bridge over the river Neretva in the city of Mostar. The bridge's swooping arch was originally built between 1557 and 1566 on the orders of Suleyman the Magnificent. In the 1990s conflict, the Old Bridge, designed by the renowned architect Sinan, was destroyed but was recently rebuilt and many of the edifices in the Old Town have been restored or rebuilt with the contribution of an international scientific committee established by UNESCO. The reconstructed Old Bridge and Old City of Mostar is a symbol of reconciliation, international cooperation and of the coexistence of diverse cultural, ethnic and religious communities. 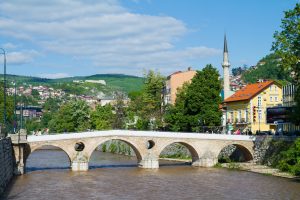 The Latin Bridge in Sarajevo is a historic bridge over the River Miljacka. It is one of the oldest bridges in Sarajevo and it has changed over time, from the first wooden bridge existing at the very same place, until today’s form. The northern end of the bridge was the site of the assassination of Archduke Franz Ferdinand of Austria and his pregnant wife Sophie by Gavrilo Princip in 1914, which became one of the important factors for the beginning of World War I. It was known throughout the Yugoslav era as Principov Most in honor of the assassin, but after the demise of Yugoslavia, Princip lost his public aura as heroic revolutionary and the bridge reverted to its original name, Latinski Most (Latin Bridge). 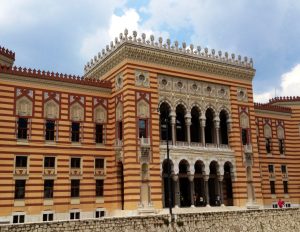 Sarajevo City Hall, a symbol of the meeting of world civilizations in Sarajevo, is one of the most beautiful buildings from the Austro-Hungarian period. Build in 1898 and seriously damaged during the 1990s siege, it finally reopened in 2014 after laborious reconstruction. The beauty of City Hall attracts the attention of numerous domestic and foreign tourists, with its 1914-1981 exhibition in the octagonal basement and its colorfully restored multi-arched interior and stained-glass ceiling. 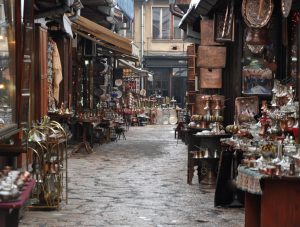 Bashcharshija is the main tourist attraction of Sarajevo. Located in the heart of the city, this bazaar is one of Sarajevo’s oldest wards as well as a well-preserved example of oriental architecture in the Balkans. Bashcharshia is a maze of narrow streets with small shops, where craftsmen make and sell their products. One time, each street was dedicated to a different kind of craft—metalwork, jewelry, and pottery, but nowadays many of the old artisan shops have been converted to souvenir shops and cafes.

The Sebilj Fountain, located in Bashcharshija, dates back to the Austro-Hungarian period and nowadays is a symbol of Sarajevo, a popular meeting point and also marks the center of the Old Town's central square. The original fountain, built by Mehmed Pasha Sokolovic, was several meters away from where Sebilj now stands but was knocked down after being damaged during a fire. The two things that everyone must do in Sarajevo are: drink water on Bascarsija Sebilj fountain and feed the pigeons. As for the water, legend says: If you drink water from the faucet on Bashcharshija, you will come back to Sarajevo again and again in the future. 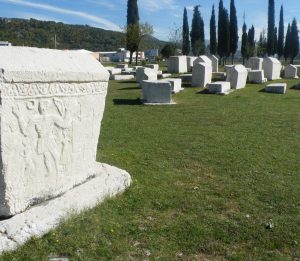 Radimlja is a necropolis located in the Vidovo field, three kilometers west of Stolac. The Radimlja necropolis is one of the most valuable monuments of the medieval period in Bosnia and Herzegovina. The necropolis itself dates back to the late 14th century, but the majority of the tombstones are from the 15th and 16th centuries. In total, the site contains 133 monuments. Sixty-three of them are decorated copies.