The Experience Balkan team accompanied by a professional photographer took a trip to Serbia, so we share this travelogue with you.

Serbia does have amazing nature, mountains, rivers and archaeological sites, natural and man-made wonders. Whole regions, towns and cities today resemble much once great and powerful Austro-Hungarian Monarchy or Royal Serbian dynasties. Yet this Balkan country remains a not enough explored travel destination. Our journey starts in Skopje. We are headed to Nish, the biggest city in Southern Serbia and the third largest in Serbia. 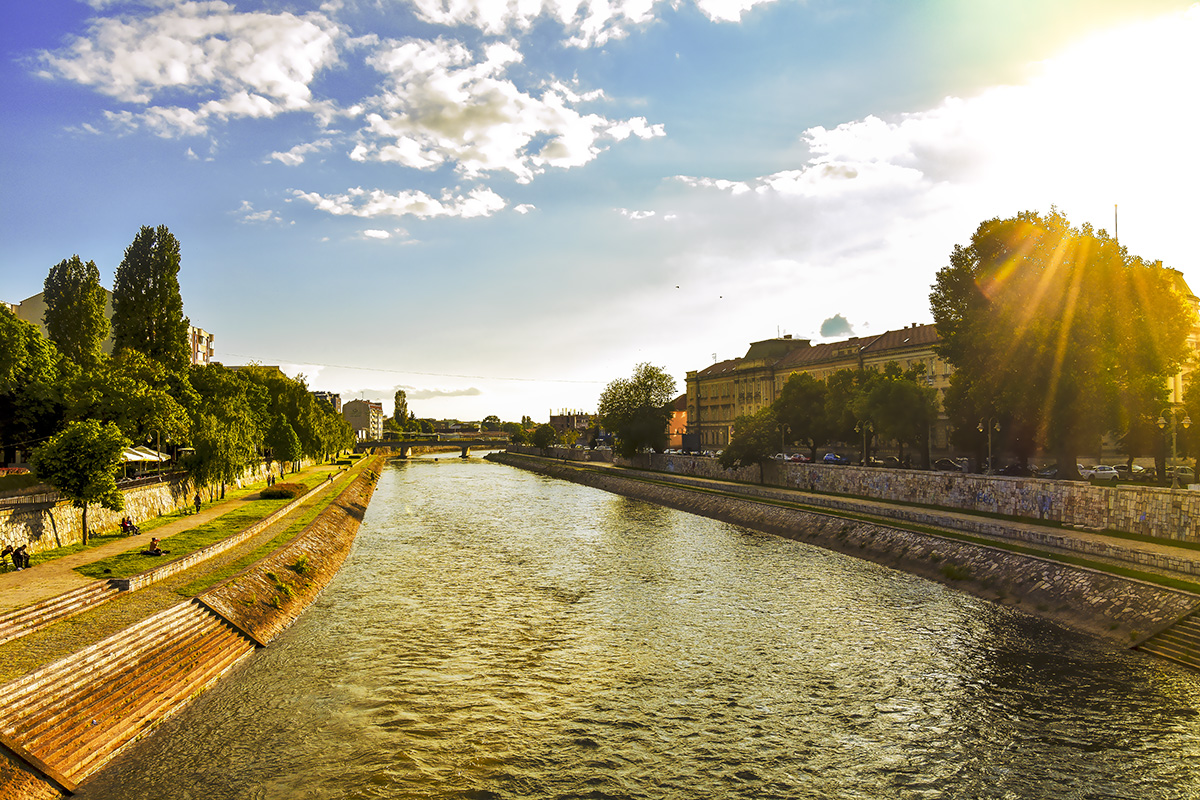 In about 2 and a half hours, we arrived in Nish. Entering the city, the first impression we got was its socialistic buildings. However, the very center of the city changed our perspective. It has a wide central square with a monument in the middle, representing the liberators of Nish, fighters against the Ottoman Empire and fighters from the First World War. The many cafes and restaurants are full of locals that seem so positive and open. They love to socialize over good food and drink. In the middle of the city flows the “Nishava” river, which is another landmark of this place. We stopped for a short snack break and we proceeded to the fortress of Nish. At the very entrance, you can spot a stage for jazz bands. Next to it is the jazz museum. Nish is a city of jazz. Every year the fortress is home to “Nishville”, one of the biggest jazz festivals in the Balkans. The fortress is large and full of people enjoying pleasant walks inside, where there is a city park. You can stop in some of the restaurants and cafes inside the fortress to taste the famous Serbian food and traditional drinks, like home-made brandy, or rakiya, made out of plums, peaches, grape…

The next stop was the Cele-kula (Skull Tower), 4 km away from the city center. The story about this place takes part in the beginning of the 19th century when Serbia was under Ottoman rule. After the epic battle between Serbs and Ottomans in the uprising, the Ottomans built a tower out of the skulls of the Serbian soldiers who died during that battle as a warning for the Serbs who wanted liberation. The tower was originally built at the entrance of the city. Nowadays the travelers can see the skull walls inside the church which was built around afterward. 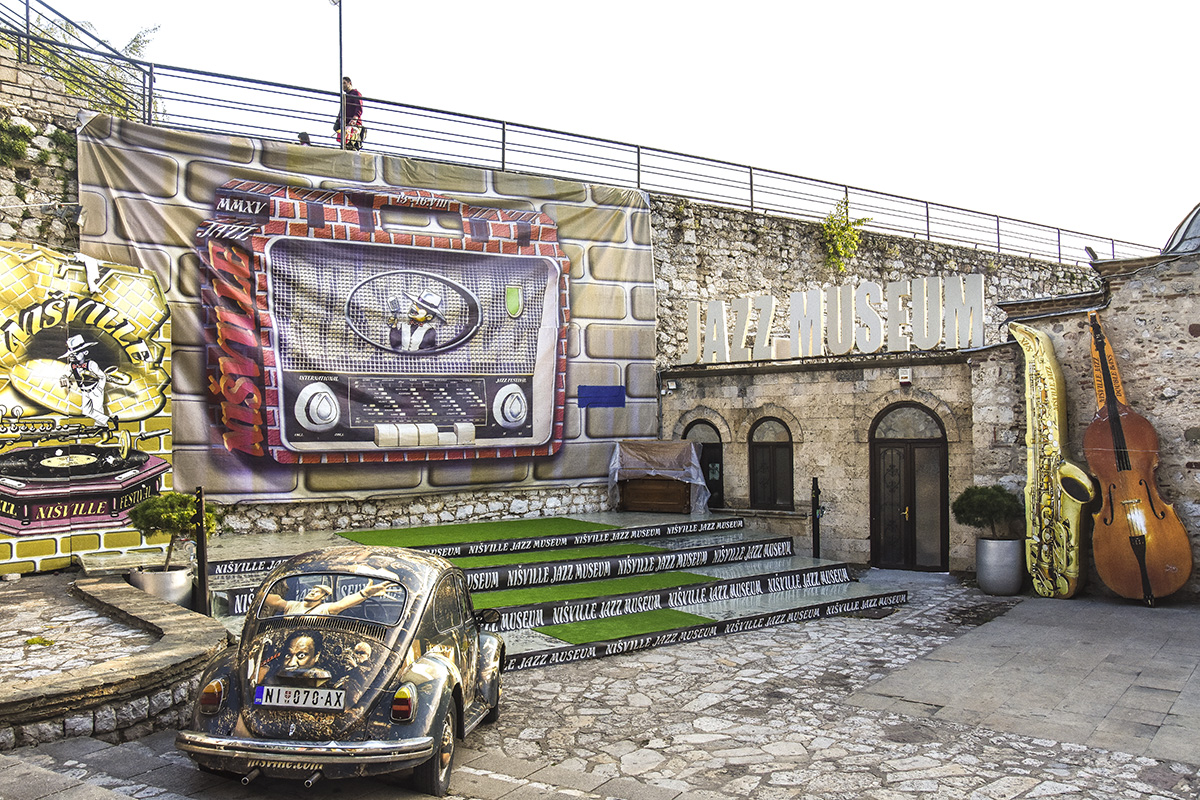 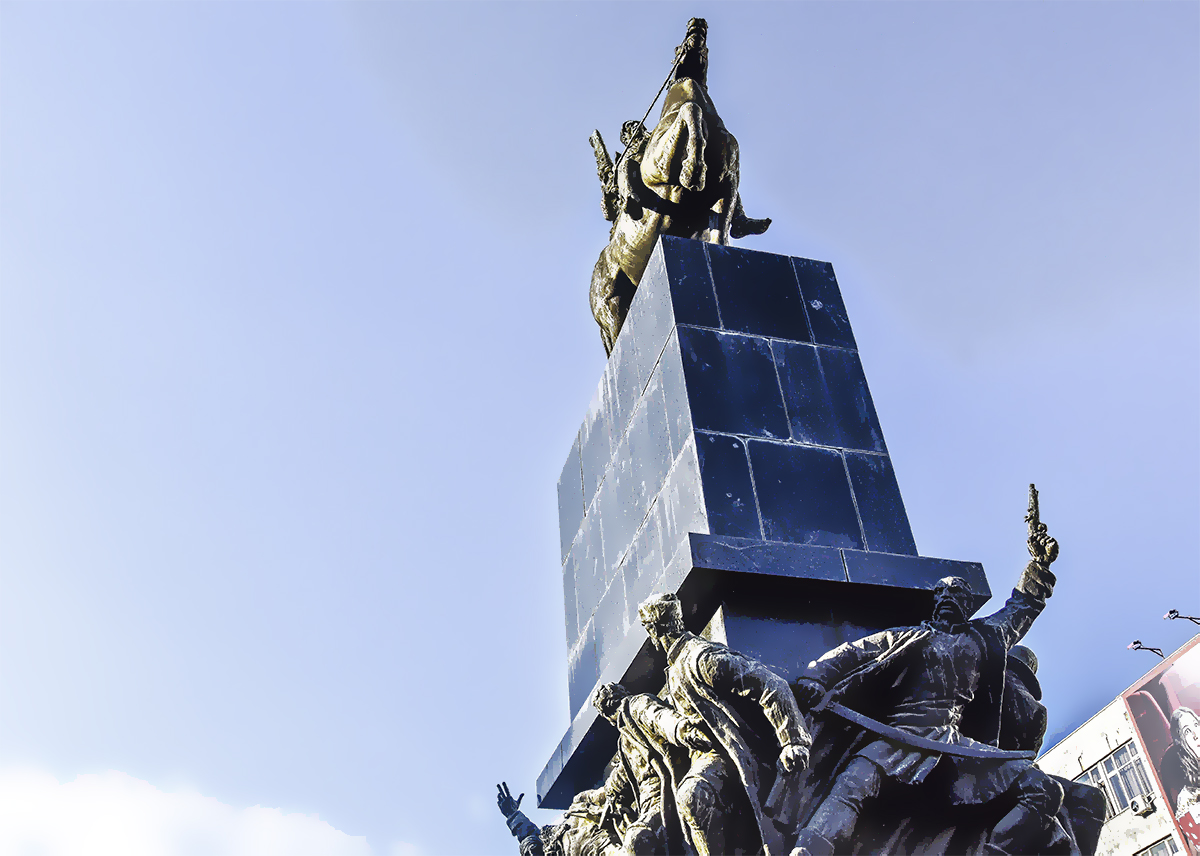 Monument to the Liberators of Nis

We are tired and ready for dinner. We aimed to “Kazandzisko sokace”, a bohemian street in the center of the city, full of restaurants and bars. We started with a glass of home brandy (rakija). The most popular rakija in Serbia is made from plums and it is called Slivovica, but Serbians make rakija out of many other fruits. The Serbian cuisine is based on meat; traditional food here is “pleskavica”, a kind of Serbian hamburger. Its grilled meat mostly made of pork and veal.

Early in the morning, we depart for one of the most beautiful regions in Serbia called “Sumadija”. We can translate the name in “the region covered with timbers”. The region is mountainous, and the villages and towns are situated on higher altitudes. The nature around us can be described as breathtaking. We first arrived in the village of “Mokra Gora”. The main and unique attraction here is the railway station called “Shargan 8”. 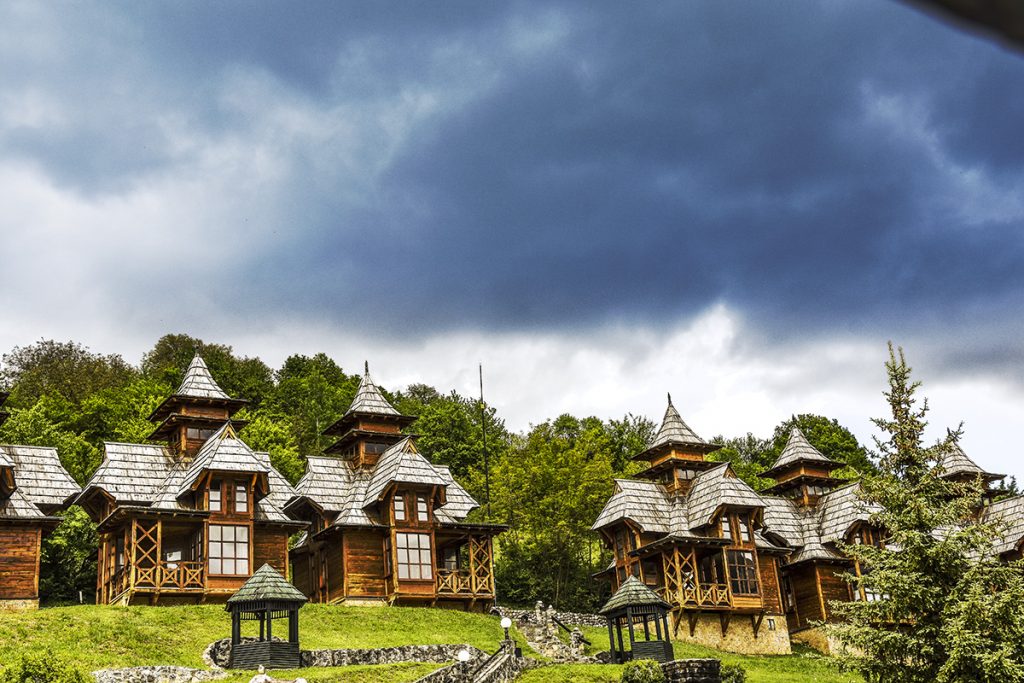 We have a deadline to catch the train which will take us through mountains and villages starting from Mokra Gora. The railway curves in a shape of number 8, consisting of 22 tunnels, 10 bridges, and viaducts, making this trip one of the most extraordinary in the region. The train departs three times a day, and every ride lasts for about 2 hours and 20 min. We have just arrived at Mokra Gora station 5 min before departure, the train was full of travelers from all over the world. An old train with carriages with wooden seats and wood stoves was standing before us, and the amazing mountains and wooden houses villages with unique architecture were all around us. The construction of this railway was finished in 1925, in that time a megastructure; a railway with 22 tunnels and 10 bridges and viaducts. The train stops at several viewpoints for short breaks, and the view of the mountains is spectacular. We felt like we went back in time, this ride simply is one very unique experience. The train finished its ride on the same place that started. 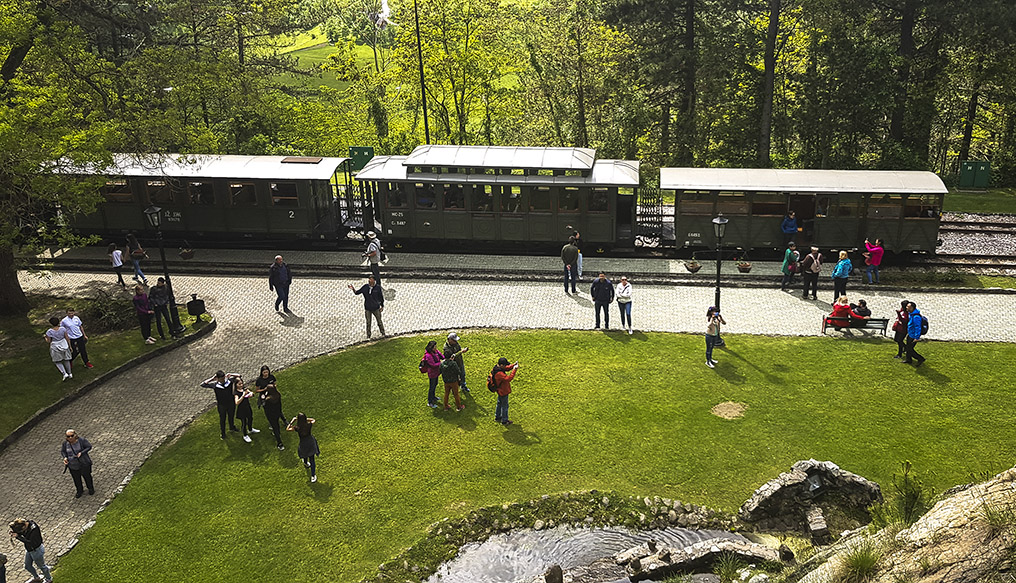 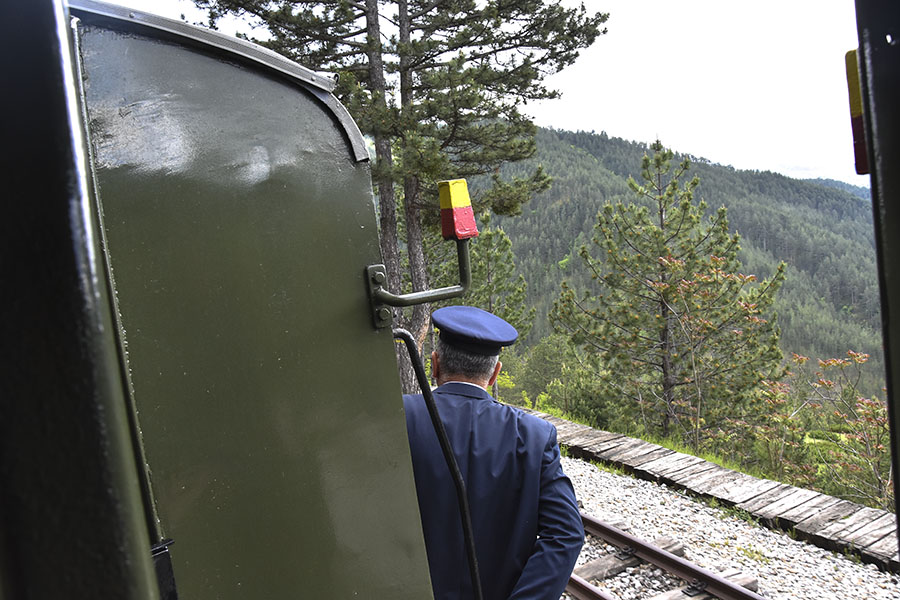 View on Mokra Gora from Sargan 8

Filled up with nature, we got back in the car to continue our journey to ethnic village Drvengrad, which can be translated as Wooden Town. Drvengrad is a very special village build by the famous Serbian movie director Emir Kusturica, and it was used as a part for his film “Life is a miracle”. Emir Kusturica with this ethnic village helped a lot in the development of tourism in this region. The whole village is made of wood. There are many wooden houses and streets named by famous persons. Travelers can drink coffee or eat traditional food in some of the restaurants; they can buy souvenirs or rent some of the wooden houses and overnight here. In Drvengrad you can find a library, a church, and a cinema hall. In this amazing village Emir Kusturica, every year organizes a film and music festival, and many famous movie stars and musicians come here.

Tips for travelling to Serbia 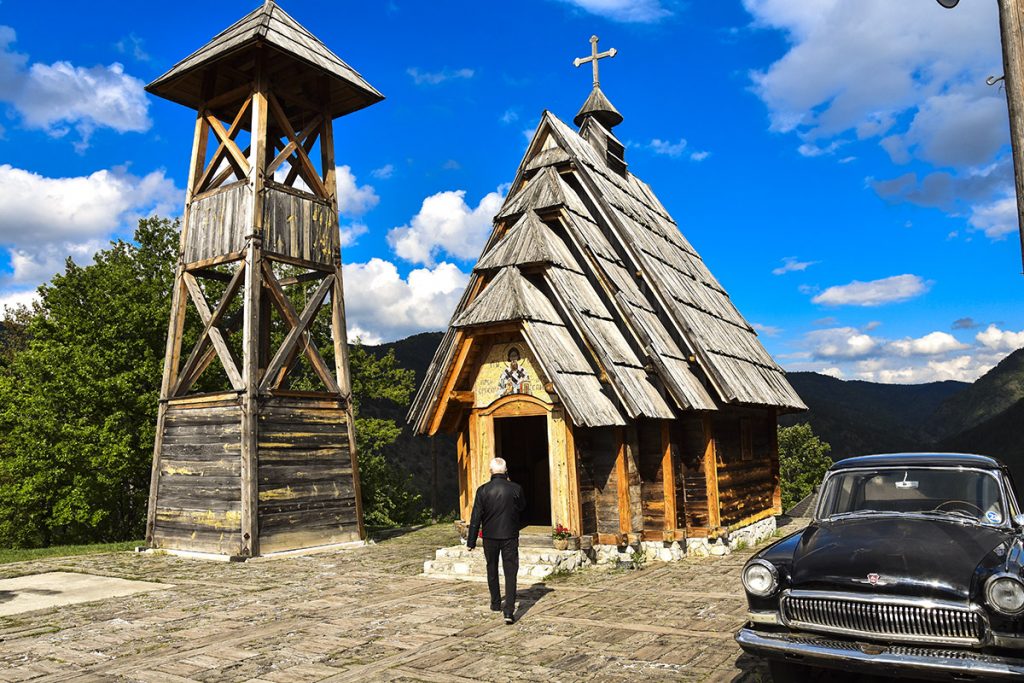 This amazing day slowly is behind us. We drive on to the city of Uzuce for an overnight.  On the way to Uzice, we made another stop in another ethnic village called Sirogojno. This village is an open air museum. Here you can visit the traditional houses with a century-old traditional interior from the region. From the conversation with the locals, we better understand how they lived here in the past and we learned a lot about the activities and habits that locals practice today. It is already dark and we are in the city of Uzice. Once again we didn’t miss the opportunity to try traditional Serbian food – meat and tasty fresh vegetable salads. The next morning we drove on to visit the town of Topola, historically a very important town for Serbia. The town was formed by the most famous Serbian revolutionary Karadjordje. In this small town, he was elected to be a leader of the first Serbian uprising against the Ottoman Empire. You can learn more about the leader Karadjordje in the Museum dedicated to him. The curator gave us a great explanation of the Serbian liberation uprising, showing us unique artifacts from the 19th century. We continued to the top of the hill called Oplenac, visiting the church dedicated to Saint George and the mausoleum of Karadjordje. 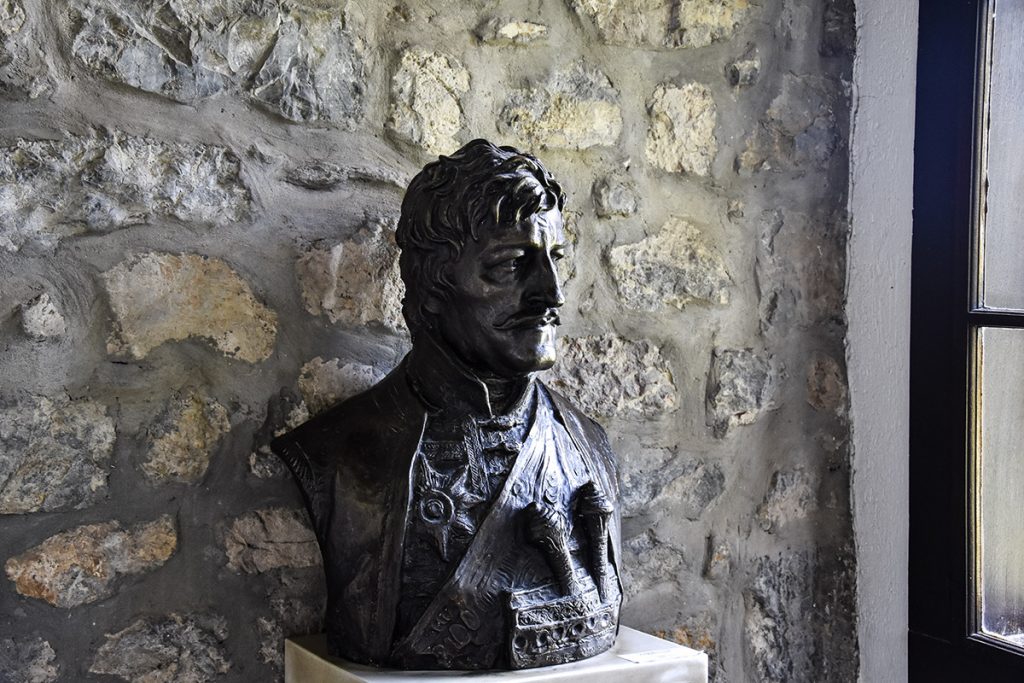 Statue of Karadjordje in Topola, the leader of the first Serbian uprising against the Ottomans 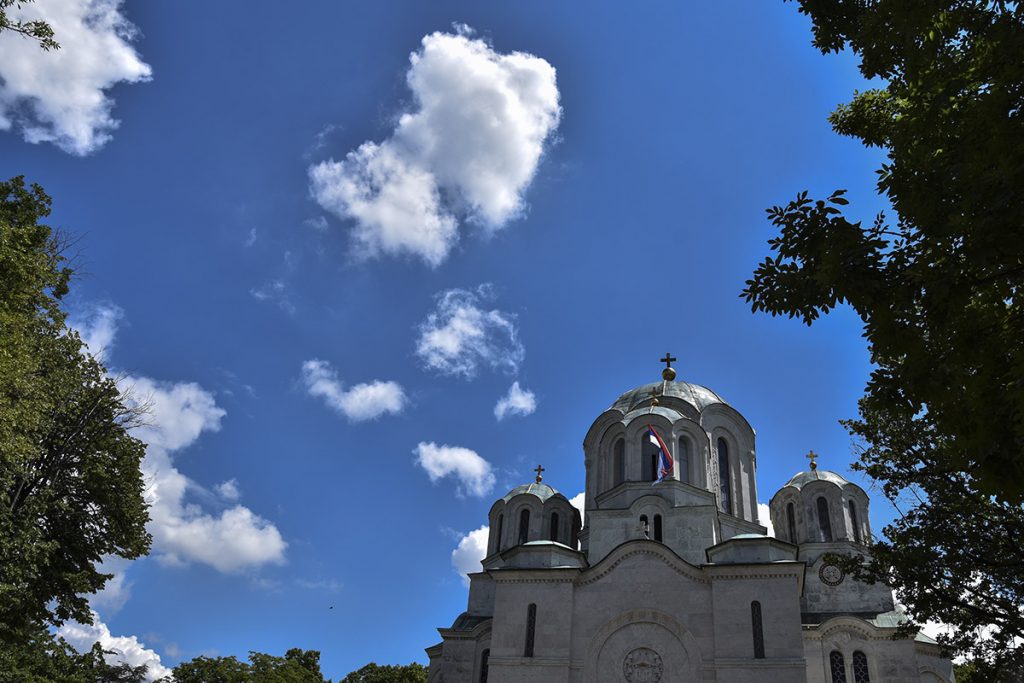 We leave the Royal town and drive 160 km north to Fruska Gora, the landscape slowly started changing, from the mountainous region, now we are looking at the endless valley called Panonska Nizina. In Fruska Gora we started with a visit to the famous Serbian medieval monastery of Krusedol. This was the right choice! Around the monastery, there was a festival going on, many people around, music stages, barbeque places, food, and drinks… Mingling with the locals, we found out that it was an annual festival dedicated to all Serbian people who died in different wars defending Serbia. It was a great experience for us to see some traditional folklore dances and listen to traditional Serbian folklore music. Eventually, we got inside the monastery itself.  The next 30 minutes we spent admiring its wonderful and well-preserved frescoes. 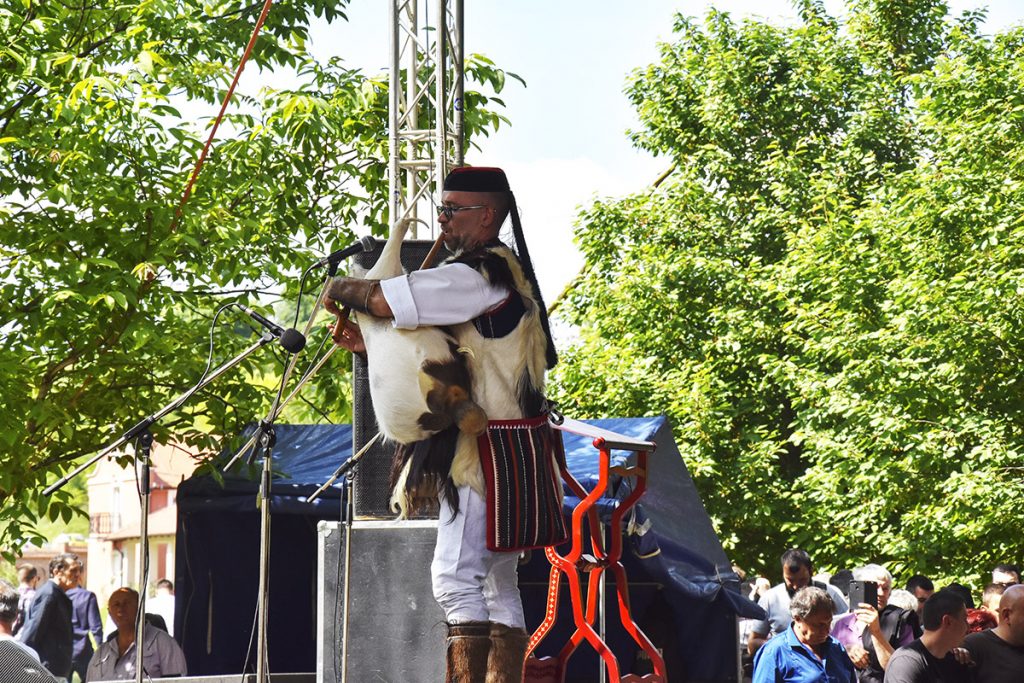 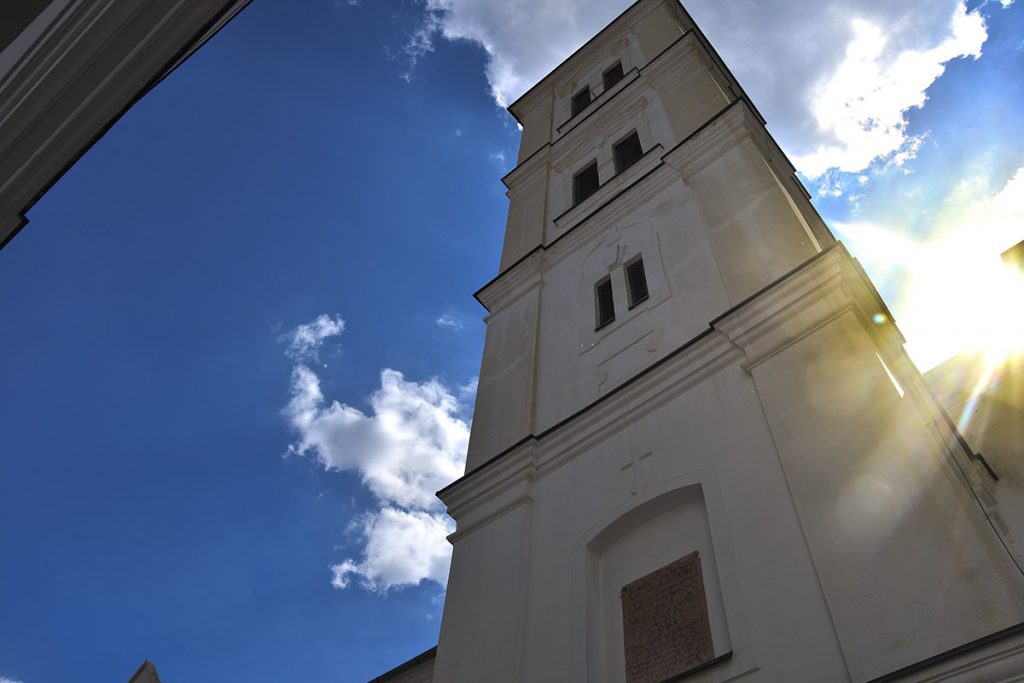 Monastery of Annunciation to the Blessed Virgin Mary, Krusedol

The southern part of Serbia was under Ottoman control, but the northern part was ruled by the Austro-Hungarian Empire. That is why we noticed a huge difference in the architecture in different regions in Serbia. The first powerful neoclassic European architecture came in front of our eyes when we arrived in the small town Sremski Karlovci, the first impressions were beyond our expectations. Amazing baroque architecture, wide Pedestrian Street with restaurants, a fountain of 4 lions in the center, everything planned to perfection. Sremski Karlovci is just 8 km from the city of Novi Sad, where we plan to overnight next. 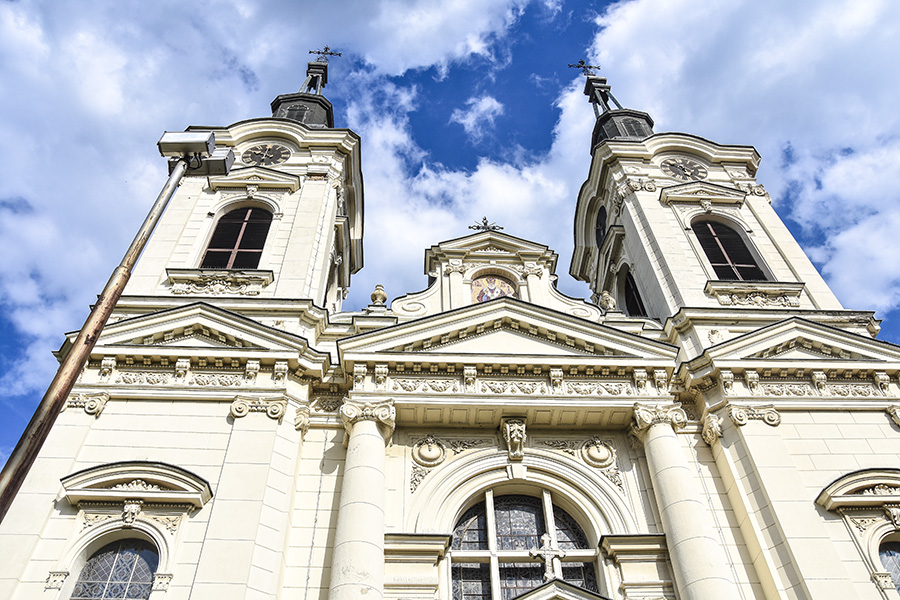 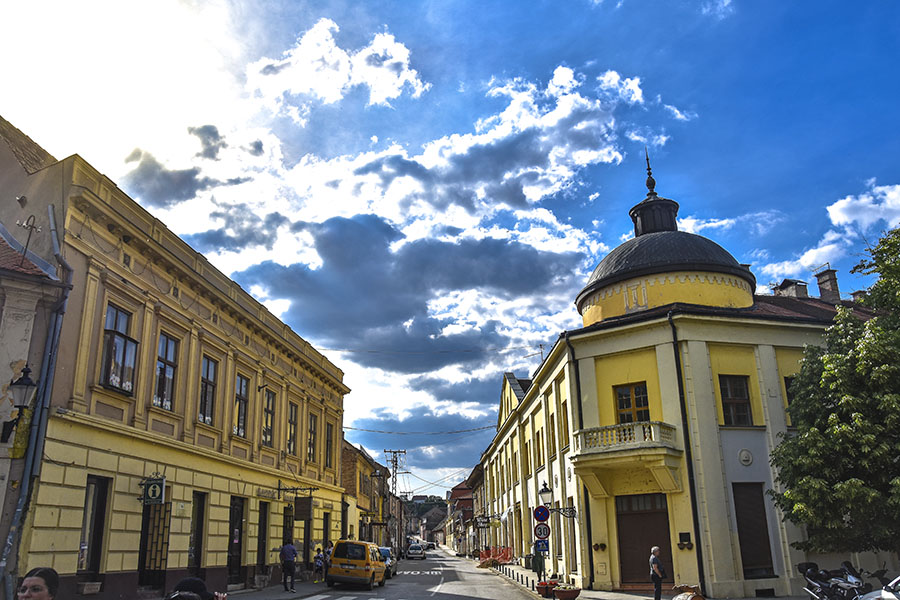 Novi Sad it’s the biggest town in the province Vojvodina, and the second biggest town in Serbia after the capital Belgrade. This wonderful city is full of life, nice parks, many restaurants, and cafe bars. The feeling was like we were in a city in Austria or Switzerland, definitely one of the finest and most modern cities in the Balkans. In the city center dominate churches built in baroque style. Perhaps the most beautiful amongst them is the Catholic Church dedicated to The Holy Name of Mary, situated right in the city square and is one of the most recognized structures in Novi Sad. At night we took a pleasant walk throughout the central pedestrian part in Novi Sad. In the middle of the central square, the crowd has surrounded a mobile basketball court. We were again lucky enough to watch the final match of basketball 3x3 tournament organized by FIBA. Serbians are known as good basketball players and basketball is the most popular sport around here. Serbia is a sports nation, with many successful players and teams. Number one worldwide known sport star definitely is the tennis player Novak Djokovic. The next morning we woke up still full of impressions from the previous events. But being in Novi Sad and not visiting Petrovaradin fortress would be not forgivable. So, we head there. Crossing one of the bridges on the Danube River, we found ourselves in front of the fortress. Petrovaradin fortress annually hosts one of the most popular music festivals in Europe “Exit”. The view from the fortress to the city of Novi Sad and the Danube River is breathtaking. 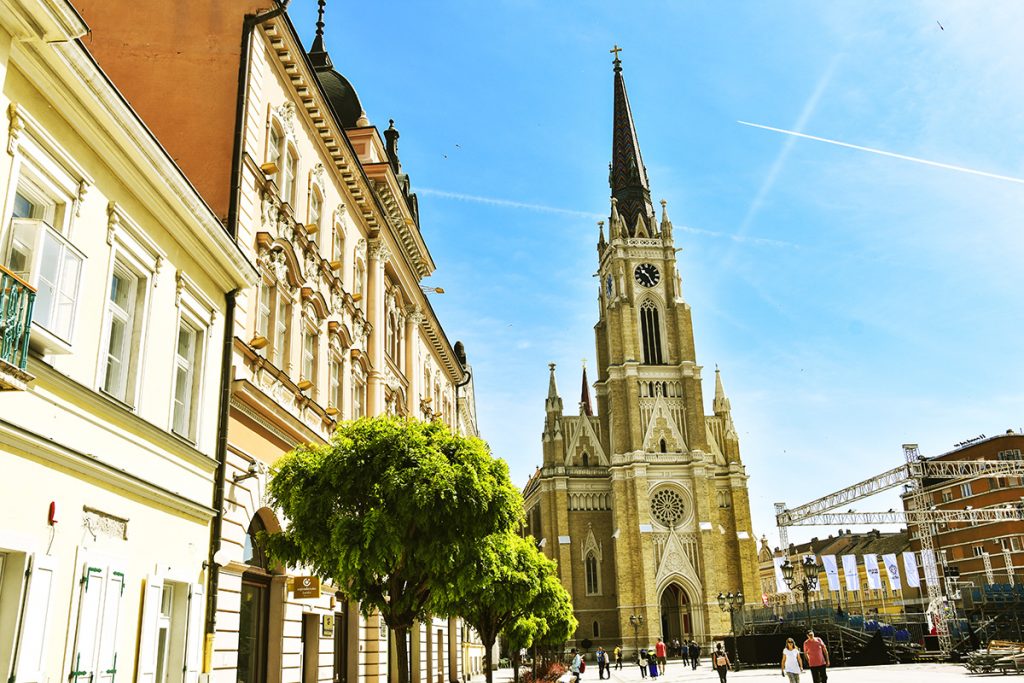 We left Novi Sad with nice memories behind us and head towards the capital Belgrade. With a population of more than 2 million people, Belgrade is the biggest city in Serbia, built on the confluence of two big rivers, Danube and Sava. With the reputation of a city with the best nightlife in the world, Belgrade is a city that never sleeps or rests. We started with one of the biggest attractions, Kalemegdan fortress. The Citadel offers you a spectacular view of the Danube and Sava rivers. The travelers who want to learn more about Ex Yugoslavia, Belgrade is the right place. The Museum of Yugoslavia is the most visited museum in Serbia located in Belgrade here you can learn more about the Yugoslavian history and life of its famous leader Josip Broz Tito. The grave of Tito also called “The House of Flowers”, is in one of the museum buildings that were on our checklist. In Belgrade, we finished our journey to Serbia, full of pleasant memories, filled up with a lot of positive impressions. We say goodbye to Belgrade and Serbia for now, knowing that sooner or later we will visit it again. 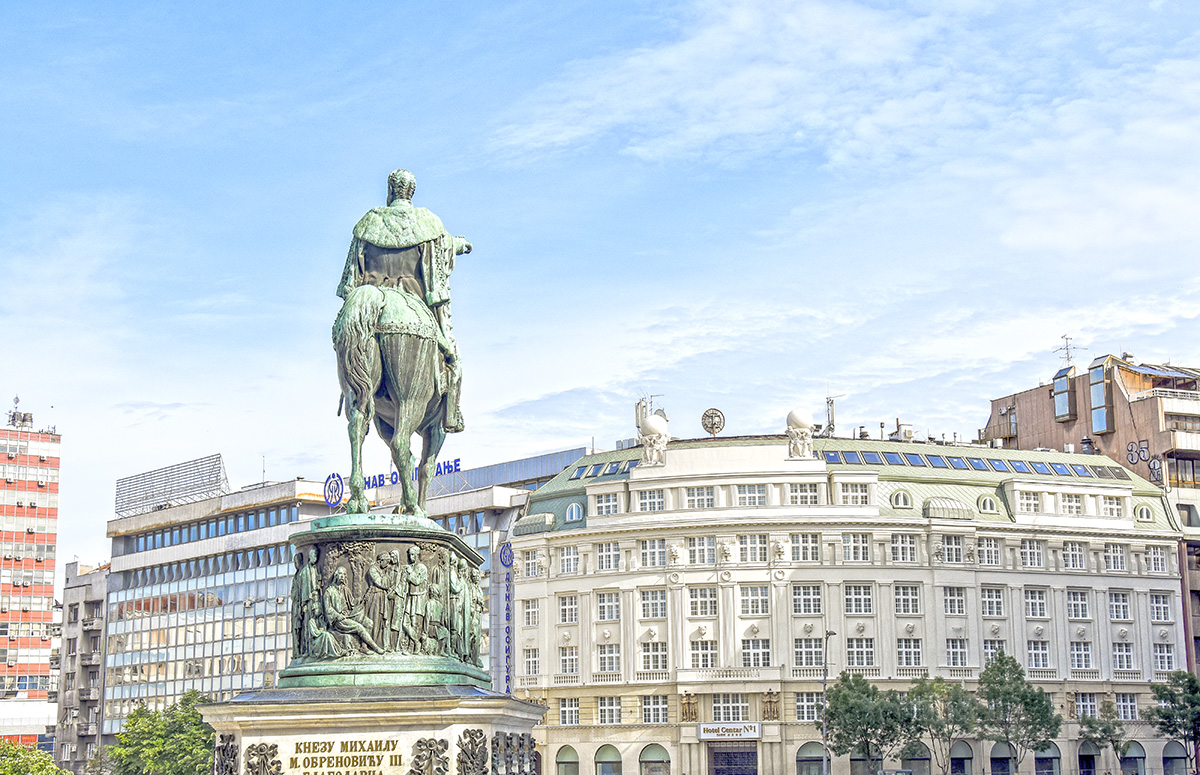